Hospitality management brings together everything Joori Goh wanted to do while growing up. She is now studying two Master’s degrees at Les Roches Marbella to help her achieve those ambitions.

When she was nine years old, Les Roches Marbella Master’s student Joori Goh moved from her native Korea to Switzerland, learned a new language, and began to dream of future careers. Little did she know her ideal role would be in hospitality.

“If you want your career to advance and to keep the ball rolling, you have to make time for that, which is why I decided to go crazy and do both Master’s at the same time.”

At first, Joori wanted to be a teacher, but learning to speak German made her consider becoming an interpreter. Hollywood actress was the next dream job, followed by flight attendant, then her love of observing people and their cultures led her to think ethnology might be her calling. After a brief flirtation with law, she graduated from high school and it was then that her grandmother suggested hospitality.

“She said ‘You’re sociable, you like making people happy, you speak languages, and you like to travel – maybe hospitality would be the best choice’,” recalls Joori. “And in a way, that’s why my last 15 years have been so rewarding. Working in hotels around the world, I’ve had to be a teacher, an actress – because if you run operations, it’s like you are on a stage – and an interpreter. I’ve done things a lawyer would do and, by moving from country to country, I’ve been exposed to different cultures like an ethnologist and traveled like a flight attendant too. By going into hospitality management, I’m literally doing everything I wanted to do as a child.”

Joori truly immersed herself in her chosen career path after high school. She studied for a Bachelor’s degree at Schweizerische Hotelfachschule Luzern before landing a role at the Park Hyatt in Korea. Joori then transferred to the Park Hyatt in Dubai, where she subsequently worked for St Regis and Western, then moved to the Mulia Hotel in Jakarta and finally the Rosewood in Vietnam for a pre-opening project.

Our Master’s in Marketing and Management for Luxury Tourism teaches the skills to develop and lead effective marketing strategies. 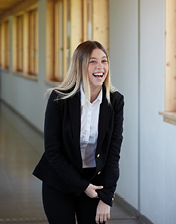 “It’s fair to say I had a reasonable amount of hospitality industry experience before coming to Les Roches, mainly in rooms divisions,” says Joori. “And I’ve gained a lot of confidence during my studies here that what I learned out in the field was putting me on the right track.”

No stranger to throwing herself into hard work, Joori has taken the unusual step of studying two Master’s programs at the same time, one being the Master’s in Marketing and Management for Luxury Tourism and the other the Executive Master’s in International Hotel Management.

“After 15 rewarding years in the industry, it’s nice to be able to take a break and invest in myself,” she explains. “If you want your career to advance and to keep the ball rolling, you have to make time for that, which is why I decided to go crazy and do both Master’s at the same time.”

“I was initially attracted to the Executive Master’s – it’s an interesting course and includes things such as project management, real estate and sustainability, which aren’t really covered that much in other hospitality schools. But then I wondered if it might be too general, so I opted to do the Marketing Master’s as well. It’s a subject that appeals to me because of the storytelling aspect and I figured it would support what I learned on the more general program, while also enabling me to specialize. So I went for it.”

Central to the decision-making process was the flexibility Les Roches offered, which allowed Joori to study both Master’s degrees in parallel.

“Originally, I wanted to study in Switzerland, but my careers adviser steered me towards the Executive Master’s because it would allow me to work if a suitable role came up,” she says. “The fact you can attend classes online was a real advantage and that flexibility enabled me to study both degrees simultaneously. There’s no way I could do this if it had been mandatory to attend classes on campus for both programs.”

Diversity was also a major factor in Joori’s choice as she knows how valuable it is to be exposed to different nationalities, cultures and age groups when working in hospitality.

“Les Roches is renowned for being globally connected and, if you’re operating on an international stage such as hospitality, that’s going to be really helpful to your career,” she says. “That definitely influenced my decision. But it’s not just the school’s links – Les Roches attracts students from all over the world and that means you make your own connections and cultural exchanges with many different nationalities, which is critically important, especially in hospitality.”

Joori found it was not just different nationalities she would encounter studying two Master’s degrees.

“I was initially attracted to the Executive Master’s – it’s an interesting course and includes things such as project management, real estate and sustainability, which aren’t really covered that much in other hospitality schools.”

“On the Marketing degree program, the students are generally from a younger generation,” she says. “They’ve just finished their Bachelor’s and have no real work experience, but they’re enthusiastic, driven and highly focused. The Executive Master’s is a more mature class, with everyone bringing their own diverse experiences to the table. It’s a different dynamic in both programs and I’m really enjoying that mix.”

What the future holds

Where two Master’s degrees in differing but complementary subjects will take Joori following graduation is still open to question.

“I’ve reached a fork in the road,” she says. “On one hand, operations appeals because you get to see how a hotel and its people develop – it’s like seeing a flower bloom and that’s a joy. On the other hand, openings and project management have caught my eye as well. They’re fields where the Marketing Master’s will really come into its own and would allow me to have an impact and leave a legacy.

“But what is certain is that both the Marketing and the Executive Master’s have given me the opportunity to reflect back on what I did when I was working, how I did it and how I could have done it better. They’ve provided amazing input that will allow me to really fine tune my skills and take my career forward.”

The start of the Fall semester marks a new beginning for Les Roches Marbella’s Ambassador, Kate

This blog entry was written by BBA5 student Ekaterina Borisovskaya, who is currently doing an internship at Gran Meliá Don…

Joori Goh is doubling up on her hospitality education

Hospitality management brings together everything Joori Goh wanted to do while growing up. She is now studying two Master’s degrees…