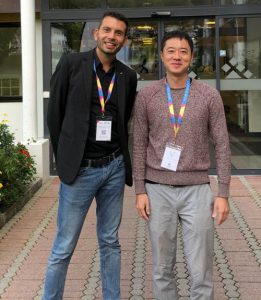 A class of 2000 Les Roches alumnus, Makoto Ota spent his early working career collecting premium hotel brands on his resume. Now he’s helping to spread the word about blockchain, a next generation technology with the potential to transform hospitality along with just about every other industry.

Makoto is Japan Growth Lead for IOST, an ultra-fast, decentralized blockchain network which is the brainchild of a non-profit foundation called Internet of Services.

“IOST is building a blockchain infrastructure headquartered in Singapore,” he explains. “In my role I am in charge of spreading the platform to Japan and creating a community for developers and users.“

Blockchain is still a relatively new technology and large companies and governments are starting to recognize its potential. However, in order to expand the market we need to get small and medium enterprises involved as well. However, it’s not so easy for them to enter with their more limited resources.

Part of Makoto’s strategy to attract SME users is to hold free workshops to help them understand the potential of blockchain and the range of possibilities it offers. And, he says, the community is growing.

“In keeping with my Les Roches ‘DNA’ I am trying to adapt blockchain technology to the hospitality industry. With a partner company we are developing services around Room Entry Management and monitoring employee attendance for hotels. Blockchain can be so useful in areas like these because it is tamper-proof, reduces the risk of system downtime and is also very transparent.”

Makoto certainly knows his way around the hotel business, having worked for international groups such as Shangri-La, Hyatt Regency and Ritz-Carlton after graduating from Les Roches. He also enjoyed a stint at Oracle Japan, as part of his transition into the world of technology.

“Since leaving Les Roches, I have had a wonderful experience in my life,” he says. “I think what we gain from a top-class hotel school is the confidence that you can ‘do it yourself’. I got to work in hotels I love around the world; and now I’m involved in a next generation technology that really interests me.

“It’s almost 20 years since I graduated, and I still interact with my Les Roches friends across the world. The school is still in my heart.”

Many thanks to Makoto for sharing his story with us!