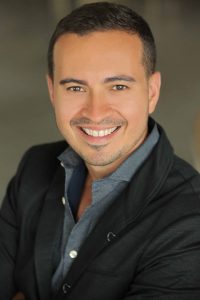 For years, Les Roches alumnus Pablo Oliveira knew something exciting was waiting for him – a new challenge. Today, he is the Founder and Creative Director of Nüage Designs, a luxury linen company, and fruit of a collaboration with a fellow Les Roches alumna.

Let us take you back to 1998, after Pablo graduated from Les Roches.

“While I was working there, I received a job offer to work as Restaurant Manager at Four Seasons. I moved to California, and stayed for over a year.” – Pablo Oliveira

But the thought of completing his Bachelor’s degree was still running through his mind. He applied to Florida International University in Miami, and completed his degree in hospitality in 2001, after which he decided to stay in the city.

“There were a few of us, Les Roches graduates, staying in Miami then. I was in my early 20s and living here. Those were fun times”

The alumnus went on to work for Island Outpost Hotels as Sales Manager, a boutique hotel group owned by Chris Blackwell, the founder of the famous Island Records.

“It was a great time to live down in Miami Beach! The boutique hotel concept was just starting, and we were part of that whole adventure.”

Taking on a new challenge – the beginnings of Nüage Designs

Shortly after taking on his new role, he found out about Junni Cai – another Les Roches graduate who was staying in New York. Junni, who had also been working for Island Outpost and Four Seasons, had decided to go into the textile industry.

“The company was small, manufacture was done in India, and products were supplied to resorts and department stores. Junni wanted to have me come on board, go into business with her as she wished to expand her business.”

And then 9/11 happened, which, of course, had a huge impact on the hospitality industry, and, unfortunately, caused Pablo to lose his job as Sales Manager at Island Outpost.

“I called my friend and said ‘You know what? That idea you had; I think I want to give it a try!’”

Soon after, he joined the business and, as time passed, they set foot into the event industry, where there was an obvious need for embellished textiles for weddings and all sorts of events. That is when Pablo started his venture. Back then, they were selling their products to various companies that would use them during events.

“But then, I observed that the way to business success was really to become a rental company, as people did not necessarily want or need to buy the product. They only wanted to use it for a specific event. That’s when I decided to turn it into a rental company, Nüage Designs. That was in 2004.”

Around the same time, Junni, his Les Roches partner, decided she wanted to go back to business school and pursue her career in non-profit organizations.

But the Les Roches connection continued. Along the way, Pablo crossed paths with three other alumni, who all joined the luxury brand. They are: Carolina Calderon, Director of Sales; Carla Jakubovic, Director of Operations;and Cynthia Wretman, Sales Representative.

“We’ve been working together for so many years now, and of course, we know the value that the education at Les Roches brings. You see what you can achieve by having quality people with great talent around you.”

The business is now the leading company in couture linen rentals. For the past 16 years, they have been servicing top event planners, luxury hotels and celebrities worldwide, by providing them with the best selection of linen and accessories.

Times of crisis – the power of the Alumni Network

Of course, during extraordinary times, it is crucial to stick together and use your network to share information, develop opportunities, and stay in touch. The Les Roches alumni community is a true family; and has a strong value set.

“We had a WhatsApp group of about five to six alumni from Brazil. And then after the whole crisis hit, we expanded, and there are now 20 people in the group! It’s all about sharing. We check how everyone’s doing, share opportunities and keep in touch.“

It is also a great time to support fellow alumni COVID-19 initiatives, such as #Masks4All, Pablo Oliveira’s new business project to keep his activities going and provide the community with high-quality face masks.

“We expanded our sewing capabilities to include the manufacturing of fabric masks. We went on to produce several hundreds of masks to donate to healthcare organizations. And as the situation escalated, we understood there was a need for people to buy and own masks to wear on a daily basis.”

Nüage Designs increased their production to make the masks accessible for everyone to buy online. In about three weeks’ time, thousands of masks were sewn and ready to be shipped!

Support Pablo and his initiative by clicking here to buy your pack of three fabric masks. With every pack purchased, they will donate one mask to the continued support of the COVID-19 relief efforts.