According to Charles Handy (Managing Organisations, 4th Edition, 1993), “the management of people is like driving a car or, perhaps, making love. Most of us do it at some time or another. Most of us do it at least adequately though perhaps we worry from time to time that we might do it better.”

Without getting into the discourse about the differences between a manager and a leader, I suggest that leadership is a situation in which many of us find ourselves at some point in our lives. How well we do it, depends on two things: our perception of what leadership is, and the extent to which we have cultivated the qualities of leadership as part of our personal development.

Do not think that this article is an objective analysis of the issues of leadership. It stems very much from my personal perspective on the theme. Because of the way we are naturally driven by our ego, leadership, for many people, is synonymous with power. Power may also be seen as the bridge between Management and Leadership.  One definition of ‘power’ offered by Dictionary.com is ‘the possession of control or command over others; authority; ascendancy’. Whether we are labeled Manager or Leader, control over a business or people, is likely to be part of the package: the power to ‘hire or fire’; the power to make decisions which will affect other people’s lives; the power to decide what happens next.

Recently, my attention was drawn to a book by Robert Greene, The 48 Laws of Power. I do not pretend to have read this book cover to cover, but what I have read, in my opinion, exemplifies perfectly the attitudes that lead to a broken and damaged society. The pursuit of power for its own sake does not lead us to a good place, and the possession of power, without the humanity and wisdom to make good use of it, leads us, and those over whom we exercise that power, to a bad place. In a series of articles, I would like to look at three of these ‘Laws’ and suggest alternative ways of approaching the concept of power within the leadership. 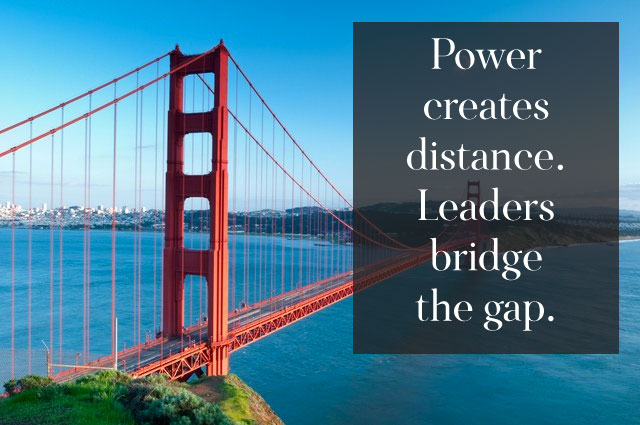 “Law 7:  Get others to do the work for you but always take the credit. Use wisdom, knowledge, and legwork of other people to further your own cause. Not only will such assistance save you valuable time and energy, it will give you a godlike aura of efficiency and speed. In the end, your helpers will be forgotten and you will be remembered.”

Now, contrast this with the teachings of Lao Tzu, who suggests, ‘A leader is best when people barely know he exists. Of a good leader, who talks little, when his work is done, his aim fulfilled, they will say, “We did this ourselves”.’

So, what is the difference?  The follower of this ‘Law of Power’ becomes the petty tyrant. He or she will never acknowledge the positive contribution made by those under them. They will criticise and devalue others’ work in order to ‘keep them in their place’. They will see praise as leading to complacency in their subordinates, rather than generating motivation.  These people are disablers.  The leader who thinks that his/her team exists to shine the light on them is also likely to create fear of failure as a driving force. The disabler does not want to have people on the team who will diminish his or her image and will simply get rid of them. Thus, more fear: of losing their job, losing the approval of their boss. People in this situation will be reluctant to expose their mistakes and failures because of this fear; they will try to cover up their mistakes, often by so doing creating bigger problems in the long term. Lao Tzu expressed this in the following way, ‘If you don’t trust people, you make them untrustworthy’. Lao Tzu goes on to say that ‘the more rules and laws there are, the more cunning the people become’. The disabler may seem to be in charge, but everything exists to feed the ego. This ultimately meets his or her needs but creates an unhappy and unproductive system.

An enabler, on the other hand, will create an environment where others feel good about themselves, are recognised for their achievements, and grow in their confidence and abilities. Loyalty is engendered because they feel valued. They are not prevented from testing out new ideas to improve the business, the service, or whatever type of work they are engaged in, by fear of failure. A ‘no blame culture’ will be at the centre of this system, where people will easily admit to their errors and ‘the big things can be fixed while they are still small’.

I will leave the penultimate words to Lao Tzu.

When he makes a mistake, he realises it

Having realised it, he admits it

Having admitted it, he corrects it.

He considers those who point out his faults

As his most benevolent teachers.’

This can only be achieved by the enabler.