I’ve always loved food; I mean the ignition of choosing this career for myself was when I first started out with my food blog, five years ago. And since then, it’s just something that’s always been around me.

I joined Les Roches wanting to become a hospitality professional and I owe it to my niche for culinary arts. This was reinforced when my first semester passed and I went to Hotel Arts Barcelona, where I had an amazing opportunity to spend a part of my internship working in a two Michelin star restaurant. Then the second year craze started out with ‘the kitchen’ semester at LRM and then out of the blue I decided to go to Dubai to do my second internship at Atlantis The Palm. My Dubai experience was like culinary Kama sutra! To be more precise, Dubai is a place where you can name a cuisine and you’ll have it. In Dubai you have an opportunity to dine in some of the best restaurants in the world; whether on the 122nd floor at Burj Khalifa’s At.Mosphere, underwater at Atlantis The Palm’s Osseania, in the middle of the ocean or seafood out of a bucket at Al Kamara, this city has no dearth of culinary pleasures.

This semester at LRM, I decided to live off campus in my own apartment and living on my own has opened avenues for me to cook for myself everyday. There’s a different joy when you go to the supermarket, buy fresh seafood and cook it at home for one and at times for many! And to be honest, with every passing day I fall in love with cooking, more and more.

Like for the last two years, Les Roches Marbella hosted its 3rd Masterchef challenge and it was quite obvious that I was going to participate. The catch was that we had to pick a chit from the bowl and that chit would decide my fate at the competition. It could go only two ways, fish or no fish, in other words meat. I was neither expecting nor anticipating meat at any cost because I am not the biggest fan of eating or cooking meat (sometimes my roommate gets annoyed at the fact that I can eat fish 6 days a week!) Guess what? I got meat. 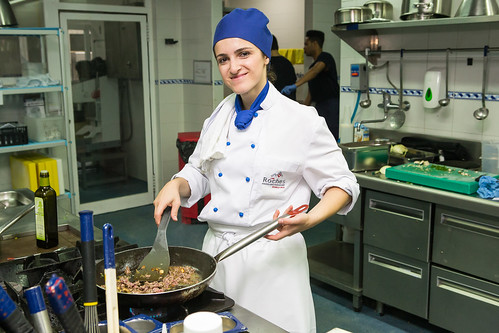 So, this was the day I had to jump my own fence. To go with the obvious, I picked chicken for the starter plate as it was one of the most diverse meats to cook and then I chose a rack of lamb for my entree, which I had never cooked before. Was I stressed? Not really, but I was definitely out of my comfort zone. At the end of the competition, I plated a Stuffed Chicken Roulade with Spinach, Goat Cheese and Caramelized Pine Nuts with Red Pesto Sauce for the starter. Then for the main I invented my own version of a Thyme and Honey Crusted Rack of Lamb with a Truffle Mash and Spicy Mango Salsa. This was when I realized that I was no longer competing with the others to be the best, I was just competing with myself! It was a competition between the part of me that knows her fish really well and the other part that was ‘finding her inner lamb’. When the results for the Masterchef were announced, I was elated, to be named the winner. The prize, of course, is the best of all because I won a week of training in Jordan at Les Roches’ Royal Academy of Culinary Arts (RACA) and an additional week in India to compete at the 2016 Young Chef Olympiad in Calcutta. However, I am even more excited that I didn’t let cooking meat hold me back. I went ahead with my sense of taste and intuition and gave it my all. Little did I know that this competition would leave me with such important life lessons, and for now I just can’t wait for the next phase of my life to start when I begin plating lessons in Jordan!

The start of the Fall semester marks a new beginning for Les Roches Marbella’s Ambassador, Kate

This blog entry was written by BBA5 student Ekaterina Borisovskaya, who is currently doing an internship at Gran Meliá Don…

Joori Goh is doubling up on her hospitality education

Hospitality management brings together everything Joori Goh wanted to do while growing up. She is now studying two Master’s degrees…