Starting in 2013 the student Running Club began organizing chairty fun runs each semester in an effort to raise money for important causes like cancer research. This year the Club teamed up with another student-based club that works to support the community, the Sustainability Club, and on Friday April 8th, they hosted the 2016 Les Roches Fun Run in support of FEDER, the Spanish Federation of Rare Diseases (Federación Española De Enfermedades Raras).

Starting and ending on the campus of Les Roches Marbella, 62 runners dressed in identical green race t-shirts in representation of FEDER’s colors ran the five kilometer route to raise awareness about this important and often overlooked cause. 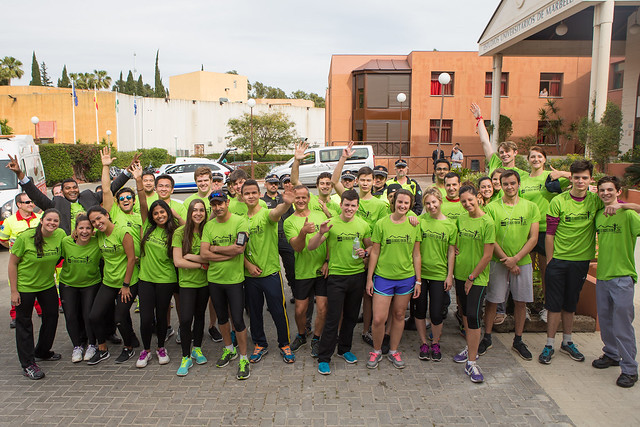 FEDER is the voice of millions of people in Spain with rare diseases. The Federation works to defend, protect and promote the rights of the more than 3 million people with rare diseases in Spain. The Federation aims to unite the entire community while making the common needs of people diagnosed with rare diseases visible to the public. Through a large netwrok of volunteers and collaborations, FEDER implements solutions to improve life expectancy and quality of life of those affected. This mission aligns with the values and standards Les Roches Marbella adheres to and encourages in its students through its commitment to corporate social responibility . It is an honor for everyone at Les Roches Marbella to support FEDER in collaboration with our student community.

The event was steered by the Sustainability Club’s student coordinator, Ms. Iphsita Kumar, and the Running Club cooridnator, Mr. Hassan Djeebet. The minimum €10 registration fee from the students and staff who participated in the race, along with the proceeds from the sale of smoothies after the race (orgnized by the newly formed Events Club), were donated entirely to FEDER.

The winners of the 2016 Les Roches Marbella Fun Run are:

Their triumph of these two students and the success of the Fun Run highlights the solidarity of more than 700 young people from 73 different nationalities who are currently studying hospitality management on campus. The race serves to highlight the students’ dedication both as a whole and individually to participate in numerous charitable actions throughout the year, including social volunteering for Marbella charity events, donating blood, assisting the local animal rescue center, and organizing food drives for the homeless.