Shaping the future of hospitality will require the tourism industry to embrace technology and strive for innovative solutions, while never losing sight of its most important asset – talented and well-trained professionals. This was the clear consensus shared across a broad spectrum of hospitality and tourism business leaders, entrepreneurs, and officials during the first International Forum on Tourism organized by Les Roches International School of Hotel Management on June 30th at Hotel Ritz Madrid.

Two discussion groups of industry experts came together to outline how the enterprises they lead are indeed drawing a new roadmap for a global tourism industry that served over a billion people around the world last year.

In his opening remarks, Mr. Taleb D. Rifai, Secretary General of the United Nations World Tourism Organization, pointed out that, “we had 1.184 billion travellers that crossed borders in one single year, 50 million more than the previous year, 2014”. The Secretary General continued, stating that currently “tourism represents about 10% of world GDP and 1 out of 11 jobs all of over the world”. With this important data in mind, Mr. Rifai stressed that “we need to keep in mind that education and tourism are two forces that can work to make the world a better place”.

Meanwhile, new tourism data related to the Spanish market was unveiled by the General Director of Turespaña (Official Tourism Institute of Spain), Ms. Marta Blanco Quesada. The promising tourism economy in Spain was further highlighted when she outlined Spain’s prominent role in world tourism, noting that “almost 6% of world travellers chose Spain as their destination last year”. According to Turespaña, this positions Spain as the 3rd most sought after destination in the world (behind only France and the U.S.) in regards to the total number of international travellers and the amount each of these spends while visiting the country. In her remarks, Ms. Blanco commended Les Roches for their role as “an international reference in the global tourism market and this is an important asset and incentive when it comes to positioning Spain as a tourist destination”.

On the role of developing young talent for the tourism industry 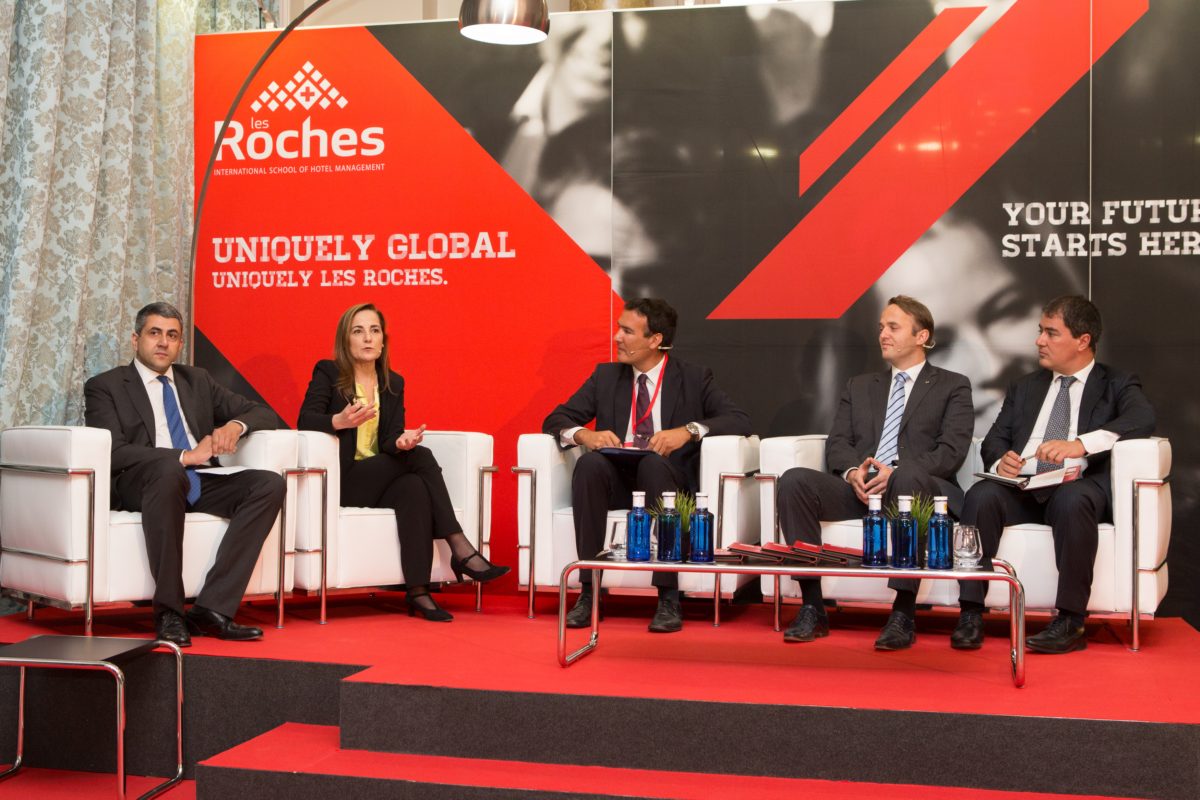 During the roundtable on developing talent for the tourism industry, Omar Valdez, “education is important to the UNWTO and its member states because it supports sustainability and competitiveness to both developing and emerging economies”. This importance was furthered by Bjorn Olthof, Global Recruitment Management for Hilton Worldwide, when he mentioned that the international hotel chain will “open their doors to a million young people around the world” as a direct way to connect people to the hotel and tourism industry. He went on to point out that Hilton strives “on all levels of youth to make sure that we are a great employer and that we are a great industry”.

Mr. Olthof’s presentation was supported by Sonia Tatar, CEO of Les Roches Worldwide, when she stressed Les Roches’ mission to train talented hospitality professionals that “challenge the status quo and look at things through a different lens, because that is when innovation happens”. In her presentation, Ms. Tatar also described the changing nature of the workforce by citing research that suggests 65% of high school students will eventually hold jobs that do not yet exist while between 60%-80% of those new jobs will come from small businesses and start-ups. Ms. Tatar’s observations are backed up by the fact that last year 4.7 million jobs were created in the Hospitality Industry. That is one new job in hotels, travel, and tourism every 2.5 seconds.

Following a coffee break and networking between guests of the Forum, Mr. Minder opened the second round of discussions with a focus on how innovation is shaping trends in tourism around the world. The protagonist of the discussion was the growing presence of the “Sharing Economy” in international tourism. To this end, leading businesses of the evolving Sharing Economy presented their innovative business models and outlined how they are not only filling in the gaps provided by traditional hospitality enterprise, but also how they are creating new market segments that had previously not existed. All this is made possible firstly by embracing technology and secondly through a collaborative effort that directly includes the interests of the client/guest.

Executives discuss the trends being shaped by innovation and technology

Starting off the discussion was Bla Bla Car executive, Jaime Rodriguez, who explained how the innovative service of pairing drivers with passengers for car trips around Europe is one of the purest examples of the collaborative economy by enabling people to share travel expenses. He stressed how mobile technology has been crucial in making this connection both possible and immediately viable.

Chema Gonzaelz furthered this development by giving a brief on AlterKeys, a company he formed in 2011 to offer homeowners professional short-term letting services. Alterkeys was eventually acquired by another innovator in tourism, Bemate.com and today he heads up their business strategy development through their unique service that provides luxury apartment rentals to guests of their parent company, Room Mate Hotels, that still want the same amenities as the hotels but with the luxuries of a private residence. This reinforces the collaborative economy by bringing homeowners within the vicinity of Bemate Hotels into their business structure.

Nakul Sharma, Founder & CEO of Hostmaker, reinforced innovation in the shared economy with his AirBnB host services provider. After two years as an individual host with AirBnB, Nakul took his hotel industry background and combined it with the growing demand of AirBnB hosts who needed a service that would facilitate the processes of renting their homes. In doing so he founded Hostmaker as a one-stop source of hotel-style services for AirBnb customers, including concierge, cleaning, and maintenance services. Since the company’s founding in 2013 they have grown to now include services in London, Barcelona, Rome, Paris, and soon to be launched in Madrid. Once again, the sharing economy and technology are at the forefront of Hostmaker’s astounding growth. Nakul mentioned how Hostmaker embraced technology and innovation as the centerpiece of its potential, saying that “as we entered the 21st century, interesting innovations revolving around trust and technology have really changed the way people are travelling”.

Concluding the roundtable, Luis Hurtado of Expedia, explained how the multinational group foresaw the changing pattern in travel and built their innovative business model around the growing trend in the sharing economy by acquiring and strengthening Homeaway.com. Homeway’s market differs from that of its competitor AirBnb in that it focuses on vacation rentals outside of the metropolitan areas where AirBnb has built its base service. Luis highlighted the immense size of Europe’s €500 billion tourist economy and how innovation in tourism through the collaborative economy is the key to securing market share and continued success in the future.

The role of Trends & Talent towards the future

Closing out the daylong event, Les Roches Marbella CEO and General Director, Carlos Díez de la Lastra summarized the panelists’ presentations by stressing that the future of international hospitality and tourism businesses rests in their ability to manage with immediacy in a fast changing environment while combining innovative technology with well-trained industry talent. He concluded by underlining Les Roches’ mission to ensure that the industry is prepared to meet future challenges by training hospitality professionals with a keen ability to think innovatively while never losing sight of the personal touch that connects hospitality to people. This is where innovation will derive and this is the future of Les Roches.